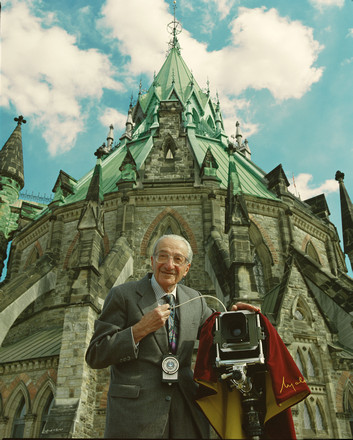 MALAK KARSH Order of Canada, Master of the Photographs Arts, recipient of the Keys to the City of Ottawa,  The Whitton Award, and the National Film Board of Canada's Gold Medal.

An Armenian born in Turkey in 1915, MALAK came to Canada in 1937; he left a legacy of photographic art of Canada and its people.  A significant collection of Malak's photography has been conserved for Canadians by the Library and Archives of Canada. This truly memorable collection is at times almost a spiritual reflection of the grandeur of the Rockies, the waves thundering on the shore of Peggy's Cove, the neo-gothic drama of the Parliament Buildings, the lonely beauty of the Prairies and the tranquil and majestic beauty of the North.  Malak never retired and died in the fall of 2001, his last photographs were of the Parliament Building with red maple trees in the foreground.

Malak arrived in Canada and worked alongside his brother Yousuf Karsh for a few years and then struck out on his own joyous journey of the discovery of Canada, using only his given name to distinguish himself from his brother. He dedicated 60 years to capturing the heart and soul of Canada in millions of photographs, a collection that is arguably the most extensive photographic record of Canada.

Malak's most cherished mission was bringing Canada to Canadians; a resident of Ottawa he made it his responsibility to capture the majesty of the Capital of Canada's government and our Parliament Buildings.  To entice Canadians to visit Ottawa he conceived of and assisted in the establishment of the Canadian Tulip Festival in 1953. The Tulip Festival symbolized his love affair with the wonders of his chosen city, Ottawa and it continues to this day .

Malak worked brilliantly, shining the light of his personal example and the medium of his photography, both at home and abroad. He challenged Canadians to travel all the far flung corners of this peaceful land, and in so doing, to imagine this beautiful country as it has never been imagined before.